Sage AX is proud to present updates to all of our tools.

These changes include many things that were discussed at the conference, and many other features that were needed. Lots of bugs have been fixed. The full details are available in the Change Logs for each program. 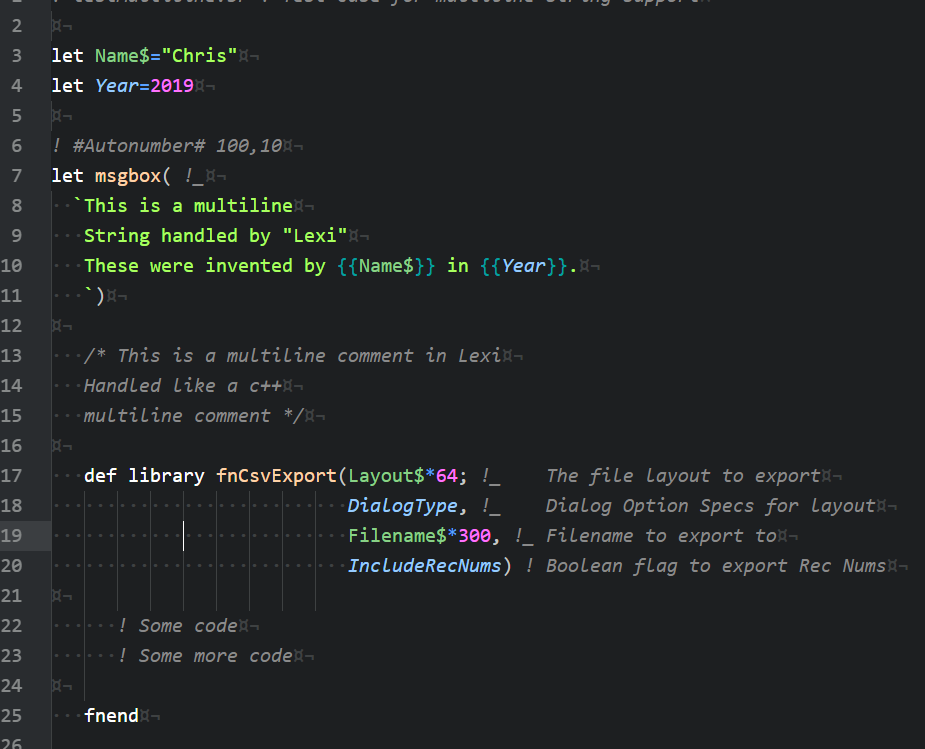 Lexi now supports Interpolated Strings using the Backtick symbol (`). If you're familiar with other modern programming technologies, these may be familiar to you.

Lexi also supports Line Continuation using !_. It also allows for line continuation automatically in a number of situations, thanks to Mikhail for the contribution. You can use Line Continuation to insert a CR in the middle of BR lines, allowing for more robust comments and easier to read code.

All of these features are translated by Lexi into their BR equivalents.

This is just the tip of the iceberg. We have many more treats coming for you all.

Below are the change logs showing all updates since the last release. If it has been a while since you updated, then download the updates and review the recentChanges.txt file (for ScreenIO) and the FileIOUpdateLog.txt file (for FileIO) to see the full list of improvements added in each new version.

FileIO:
Version 110: Added support for Partial Keys (Syntax Example: data\customer.key, name/startdate(5:8)/startdate(1:4)). Fixed fnBuildKey to support the -U uppercase flag for case insensitive indexes. Version 109: Added support in fnCompare for Drive Letters in File Layouts.
Version 108: Made Index Parsing more robust. It now will no longer get bugged by partial subscript matches. Also, made the subscript names case insensitive. Also, fixed a bug that was preventing the -U uppercase flag for case insensitive indexes from working.
Version 107: Fixed some bugs in fnCalculateHours, thanks Laura Smith for this function.
Version 106: Fixed a bug that prevented fnReadSubs (legacy function) from working.
Version 105: Added "SERIAL" as a synonym for "JULIAN" when specifying the Date on Disk format in the file layout ",DATE(SERIAL)"
Made the $ sign optional in the File Layouts (unless its a G spec. For G spec, if you want to read the G field into a string variable, you still need the $. For all other specs, the spec type determines if its a string field or not.)


ScreenIO:
Version 2.71 -- Fixed it so that typing a DATE$(mm/dd/ccyy) spec in a listview conversion routine won't crash, it'll simply fix it to DATE(mm/dd/ccyy) like its supposed to be.
Version 2.70 -- Improved License Check routine to fix compatibility with BR4.32c linux version. (Previously, a bug caused valid licenses to not be detected.)
Version 2.69 -- Added Project and Notes fields that can be set in the Screen Attributes window, and are viewable in the Load Screen dialog.
Version 2.68 -- Made it automatically convert caption if you change an auto-added text field into a check box or radio button.
Version 2.67 -- Changed it to update the existing screenflds records instead of deleting and readding all of them.
Version 2.66 -- Changed it to not pad your custom functions with a space on each column for better compatibilty with the Atom editor, configurable with an ini setting
Version 2.65 -- Fixed a bug that caused ScreenIO to crash when displaying a listview with no data in it.
Version 2.64 -- Merged all lexi functionality. Now I call the lexi library so its the same code base and all lexi improvements appear in ScreenIO immediately.
Version 2.63 -- Added fnBR43 library function to automatically included library statements. Cleaned up the Fnfm$ call in screenio.br.
Version 2.62 -- Improved Tooltip Text for Control Attributes to state which ScreenIO array is used to view or change this attribute during runtime.
Version 2.61 -- Added error handler to Download Code for when internet connection can't be found. Added error handler for uncompilable library.
Version 2.60 -- Made it so that in a Mat MyF Screen, if there isn't a key to pass back, then it passes back "1". This way you can tell if the user accepted the Mat MyF Screen or not.
Version 2.59 -- Fixed a bug in one of the parameters for the included custom function fnDeleteListviewRecord.
Version 2.58 -- Added "Check For Updates" functionality.
Version 2.57 -- Added ability to import screens that were saved with previous versions. Can import any .sio file saved April 2017 and later.
Version 2.56 -- Added Created by User and Modified by User to the ScreenIO data files. These show up as columns in the Select Screen dialog in installations of ScreenIO with more then one contributing programmer.
Version 2.55 -- Fixed a bug in the Power Search routine that caused a crash when running screenio in a long path.
Version 2.54 -- moved call to fnRunAnim so that clock shows even when the first bunch of records are filtered out.
Version 2.53 -- Changed File Menu "BR Console" to "Run Application" because thats what it does.
Version 2.52 -- Fixed a bug that made FMT and PIC specs sometimes fail to work for listview columns.
Version 2.51 -- Fixed a small bug that was causing fnInit_ and fnFinal_ functions to generate for every custom function instead of just Listview functions.
Top
Post Reply
1 post • Page 1 of 1